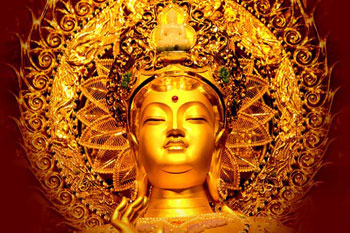 The Filianic Scriptures tell us that the world was golden in the beginning:

And each fragment was filled with Her delight, and therefore was living. And some grew in the deep earth, and were plants and trees; some ran about the ground or flew above it; and those first-made that had no place to be set down became the fishes and the creatures of the sea. And every thing was golden.

Hear the Filianic Scripture of the Creation spoken:

After the First Daughter of Creation turned from the Mother, the world lost its golden color and took on all the seven colors. There has been much discussion of the meaning of this symbolism. Let us therefore consider its deeper meaning.

Why gold? We know that the first Age of the World was the Golden Age, but the Golden Time of the Filianic Scriptures does not actually refer to this. The Golden Time precedes any cycles of any physically manifest world. Nevertheless, the Golden Age of a particular world's history does reflect the Golden Time, the perfect and pre-manifest state of existence.

But again, why gold? We must understand that gold is not actually a "color", but a metal. In traditional heraldry, there are five tinctures (colors) and two noble metals, representing the seven Principles. In Far Eastern traditions, the seven Principles are represented by the Sun and Moon plus the five elements. In other words, the Solar and Lunar principles, while being a part of the septenary of Powers, are distinct from them. (From another and complementary perspective, this distinction is also shared by the Rhavic principle, represented in heraldry by sable – black or no-color.)

Before the fall, maid could look upon the Mother: she was able to exist in the Solar or Golden environment without being overwhelmed by it. Afterward, the very first actions of the Mother were to create a rainbow, which shed "every hue and color" on the earth. No longer was the world the single, solar color but manifested all the variety of creation in differentiated form. The Silver light was now created: the light that is mediated to the earth by the Daughter and is not too great to be looked upon, in other words, the Lunar light. The next book of the Filianic Scriptures – the Mythos of God the Daughter – tells the story of the descent of that Silver light from the Lunary realm to the material world.

Divergent versions of the Filianic Scriptures

Some later versions of the Scriptures have changed the Golden Time to a Silver Time, which clearly disrupts the Solar/Lunar symbolism of Mother and Daughter.

Why was this done? The most likely theory for the first instance of this change – which fits with a number of other changes that were made – is a desire to "lunarize" the "goddess" in the manner of patriarchal Classical mythology much beloved of "pagans" and some "feminists". This change originally represented the new order of patriarchy in which Solar symbolism was masculinized (originally throughout the world the Solar was feminine, as it still is, for example, in Japan) and femininity was relegated to the lesser light of the moon.

Later redactors, supporting the change, have put forward more sophisticated arguments. Probably the best of these is that white light contains all colors and therefore is correct for the pre-differentiated light of pre-manifestation. The problem here is that silver and white have never been symbolically the same thing. Silver is always and everywhere Lunar, in contrast to gold which is Solar.

It has been argued that silver reflects all colors accurately. A gold mirror gives everything a golden tint, but a silver mirror correctly reflects all colors. This is a very good argument, but it is actually an argument for the wonderful completeness of the symbolism of the Filianic Scriptures as shown in the Golden Time.

This is actually a very profound symbolism, since the Lunar Daughter is the Sustainer of the World. It is precisely through Her that the manifestation of the seven colors is made possible and preserved in being.

Lunar symbolism is complex. While at its highest it is representative of the Daughter, it is also the principle governing the Lunary World or Anima Mundi. This is, to quote our article on the Anima Mundi:

The Candric or Lunary domain, the realm of the Anima Mundi or cosmic soul. In other words, the domain where the Solar Archetypes first enter (or, more accurately, are reflected on) the domain of flux and change, before they reach the “material” level.

The creation of the Solar (and therefore golden) Archetypes is the theme of the Golden World section of the Filianic Scripture's Creation story. After the Flood we see the mediation of those Archetypes into the Candric or Lunary domain and finally into the material domain.

Indeed it is possible to speak of a Silver World. This would refer precisely to the Lunary domain which, unlike the Golden World of Pure Spirit, is situated in the world of flux and change, but is not yet a material manifestation.

It is proper and traditional to refer to the Lunary realm as the psychic domain (anima is simply Latin for Greek psyche – both meaning "soul"), but the problem with such a terminology is that it tends to be confusing since the term "psychic" has been so badly abused in modern times and the distinction between what is properly psychic and what is Spiritual has become very blurred in modern terminology.

This actually adds an interesting sidelight to the "Silver Time" re-writings of the Filianic Scriptures. While consciously they appear to have been motivated by the "lunarism" of "goddess feminism", symbolism is more powerful than the people who use it. On a deeper level the use of silver for the Primordial World situates it in the psychic rather than the spiritual domain. This, of course, is very natural in the case of New Age and Pagan movements which have long confused the psychic with the Spiritual.

What "psychic" actually means here is "the domain of the soul", that which stands between Spirit and matter, the Lunar domain that is between the Solar and the earthly. The Mythos of God the Daughter shows how the Light is brought from the Heavenly realm through the Lunary realm to the earthly domain and even below that to the sub-earthly regions. We say "the Light" because there is, of course, only one Light – the Solar Light of the Mother. The gentle Lunar light is the reflection of Solar Light in a form that we, and creation as a whole, can look upon, and thus – since without the Light creation would cease to be – the sustainer of the worlds.

The Lunary domain stands between the Solar and the Earthly. It is a world of duality and choice, and is the domain of Maid, the axial (or human-like) being who, by definition, has the power of choice between the light and the darkness.

This is what is meant when the Filianic Scriptures tell us that God "became Maid": not that she became a physical being, but that she became soul, or entered the Lunary domain. Only thus could She sustain the worlds by mitigating the Golden Solar Light upon which beings could no longer look into the mediating Silver Lunar Light which makes possible the reflection of the seven colors and thus the existence of all creation.

Filianic Scriptures: A Look at their Music

Original Sin and the Snake: The Beginning of Manifestation