In our page on choosing Mary statues we discussed some important elements of Mary's canonical image. We considered how, while on the verbal level of rational discourse, Mary's divinity is theologically denied by the Catholic Church, on the deeper level of symbolism, Her divinity is iconographically affirmed.

We have discussed the fact that true symbolism is not a chance set of images with meanings arbitrarily assigned to them by human minds (this process is properly called allegory rather than symbolism); rather the fundamental symbols of traditional culture are part of the structure of the cosmos itself: they are our view of the celestial Archetypes, or Divine Ideas, that are the very Forms which shape the substance of the universe.

Consequently, as explained in Creation Myths and the Virgin Mary, symbols – especially those of canonical iconography – have a life of their own, independent of the human minds through which they may be transmitted: and even apparent "errors" can, on occasion, play a part in rescuing traditional images from such human interference as patriarchal re-writing.

One such symbol is the very name of Mary. The Ma- etymon, meaning Mother, is found again and again, throughout all language-groups in the Names of Dea. All Indo-European languages have it and we find it in the far east in such forms as Ma-tsu (Heavenly Mother). While the Hebrew name "Miriam" is nor directly related to this, in its Westernised form "Maria" by which Mary is known to all Christians, the ancient Ma- designation of our Mother God is restored.

Déanists often refer to the Mother as Mari/Marya and God the Daughter as Anna or Inanna. Interestingly the names are apparently reversed in Christianity with the Mother of Mary being Saint Anne – however, for most iconographic purposes Mary represents the Mother-Creatrix. Mary-and-Anne icons are a special case which stress the daughter-aspect of Mary in the Divine Mother-Daughter Icon; although, as we have discussed elsewhere, various other traditional images found in Mary statues and pictures stress Her aspect as the Daughter-Saviour. For example the flaming/radiant Immaculate Heart is the Mother-heart, while the heart pierced with swords is the sacrificial Daughter-heart (see The Immaculate Heart of Mary). 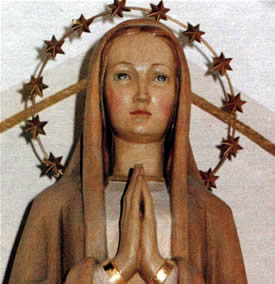 Another fascinating symbol is the crown (or nimbus) of twelve stars about Our Lady's head in many Mary statues. While this is immediately drawn from the description in the Book of Revelation, it has a much more ancient origin, and is notably found in images of the Divine Ariadne. Ariadne, who provides the clew or thread that leads the soul through the labyrinth (our English word "clue" comes directly from this thread), is originally both the saviouress who rescues the soul from the maze of samsara and the thread-spirit (sutratman), and thus pure Divinity.

Both lilies and roses are frequently associated with Mary and depicted in Mary statues. The rose is often identified as the Western symbolic equivalent of the lotus, and, as we see throughout this site, the lotus is present in a majority of Eastern images of Dea, whether as Kuan Yin, Tara or the various Indian "goddess" forms. The lotus is a rich and profound symbol which we shall discuss at length elsewhere. One of its primary meanings is the unfolding of the universe itself at the feet of the Creatrix. Likewise, the Rose is termed Rose of the World (Rosa Mundi). The lily, in its aspect as water-lily carries the water-borne aspect of the lotus symbolism and is often taken as a symbol of the Daughter while the Rose symbolises the Mother, thus the attribution of both flowers to Mary indicates yet again Her dual Mother/Daughter nature.

We have passed rather briefly over the important symbolism of these sacred flowers, because they deserve full treatment in an article of their own – and will get it. However, we hope we have said enough to make clear the orthodoxy and importance of yet another symbolic aspect of Mary statues for devotees of our Mother God.

Pre-Vatican 2 Mary statues are more likely to be iconographically correct, and their supposed "sentimentalism" depicts Mary as Universal Loving Mother (or Saving Daughter) rather than as a human individual.

The common accusation that pre-Vatican 2 statues are "sentimental" is, in fact, rather ironic: for these statues appeal to the Universal both in their iconographic correctness and in their depiction of more-than-human love.

On the emotional level, we should be looking for images that inspire love and devotion, remembering that, for us, Mary statues are not images of a historical woman, but of Our Mother God.

Now read: Choosing a Statue of Our Lady Mary: A guide for devotees of Our Mother God.

The Immaculate Heart of Mary: Radiant Centre of the Universe

Making your Home Shrine: Household worship of Our Mother God

The Mother-God Hail Mary mp3: The Hail Mary as "translated" for devotional use by children of Our Mother God, presented and explained in a sermon given at a Filanic Service