Feminine Trinitarianism
A discussion of the Filianic Trinity

On the Filianic Hail Mary and Feminine Trinitarianism

The right reverend and most honoured Bishop Sarah of the Church of the Divine Heart has raised an important thealogical question in relation to our proposed "translation" of the Hail Mary.

To remind you, the proposed translation is as follows:

Hail Mary, fount of Grace
All Godhead is Thee
Blessed art Thou by all maidens
And blessed is Thy love's first fruit, Thy Daughter,
Holy Mary, Mother and God,
Shelter us fallen ones now and at the hour of hour death.

I would make some modifications to the second line because of the use of the word 'Godhead.' In a Trinitarian thealogical understanding, a Godhead is a constituent person within the triune God (even the word 'constituent' may not be accurate). Mary in a Filianic thealogy is either the Mother, or as understood in Christian mythology the Daughter. While it is proper to say that Mary then is the fullness (or 'all') of God, it would be somewhat confusing to say She is all Godhead without simultaneously nullifying the triune concept.

The proposed translation is only provisional, of course, and I have tried to make it clear that any variations with which devotees feel happier (such as restoring "sinners") will be entirely acceptable.

It would be nice – though by no means essential – to have a unified version in the end, and that is likely to come from time and practice, and from valuable discussions such as these.

Trinitarianism in theology has always been a somewhat thorny issue for Christians. It has been the subject of very careful (and often extremely subtle) definition as well as one of the greatest single issues over which one group of Christians was branded as heretical by another.

A great deal of the reason for the "sensitivity" of Christian Trinitarianism, in our view, is the Western tendency to feel the need to apply the categories of logic and reason (the inferior functions of Intellect) to matters which can only be grasped by Pure Intellect (jnana, vathe) or Pure Love (bhakti, sushuri).

One result of this has been a certain literalism and even a nascent "individualism" (regarding the Persons of the Trinity as if they were actually individual entities in the manner of created beings) which contains the seeds of the far grosser errors which were, much later, to overtake the West.

That is to some degree an oversimplification and neglects certain other aspects, but it is sufficient for our present purposes.

While the Trimurti is generally accepted in India, one will not infrequently read Vaishnava texts which declare Vishnu to be the Supreme Deity, reducing Siva to a subordinate role, and Saivite texts which do the reverse.

In the West this would constitute a "theological dispute" in which one side must be right and the other, consequently, wrong and heretical. In the East the two views can be readily understood as different spiritual perspectives.

Sri Sankaracharya said that there are three ways of approaching God: through Shiva, Vishnu or through the Mother. Each one, when fully pursued, is entitled to a certain "exclusivism" – the claim that its God is the only God: which is true, for there is only one God, and seen from the perspective of, say, the Vaishnava, that God is Vishnu/Krishna. 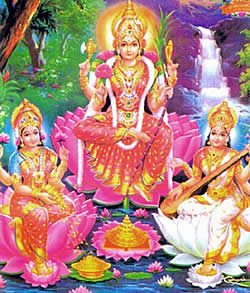 In this sense, we are followers of the third of Sri Sankara's Paths. We say that the Path of the Mother is the oldest and truest of the Paths, and while I believe this to be literally true, I will not press it against a devotee of Krishna or of Christ, any more than she (if she be civilised) will press hers against me.

As an aside, I should state that none of this means that I am saying there is no such thing as "heresy", or spiritual error. Indeed, the Tellurian West displays more examples than one can readily count. But that is quite another matter.

To return to our proper subject. A quasi-exclusive cult of the Daughter (which would be directly comparable to Vaishnavism) would be unlikely in Filianism, precisely because of its soteriological perspective and the clearly-defined relationship between the Lunar Daughter and the Solar Mother.

However, there are those ("pure Déanists") who cannot accept the Daughter as a separate Person, largely because She is not part of a living Tellurian tradition (actually that is debatable, but such is their position) who will nonetheless agree that the Saving Function of the Daughter (the "Daughter Aspect") is part of the Mother and is clearly enunciated in Telluria in such wholly orthodox figures as Kuan Yin.

Such Pure Déanists usually have no difficulty in attending Filianic ceremonies on this basis, seeing the Daughter Mythos as a metaphor rather than a Revelation. Indeed many of us take a position somewhere between the two extremes, without feeling the need to define that position in precise rational terms. We do not, after all, forget that in matters of the Spirit, reason itself can never leave the plane of metaphor. Only Pure Intellect can be precise, and the precision of Pure Intellect cannot, by its very nature, be formulated in words. The Tao that can be spoken is not the true Tao.

Not being bound by the "literalism" and "personalism" that has characterised Western Trinitarianism, Aristasian Déanists have a somewhat more fluid view of both the Trinity and of Godhead. The statement of a Devotee of Sai Sushuri (rare in Telluria, but not unknown in the Motherlands) that Sai Sushuri is the One Dea would not be considered heretical or even eccentric. Since each Janya is, in her highest essence, a "prolongation" of Dea Herself, Dea can be worshipped not just through but as any of Her Great Janyati.

Beside this, the statement that the Mother is "all Godhead" is not very radical at all! Naturally, the Mother here stands for the full Trinity as Its "central" Person. Furthermore, the iconography of Mary clearly represents Her on different occasions as both the Mother and the Daughter and while we would tend to reserve the actual name "Mary" for the Mother in our own devotions, the "flexibility" of the same "Person" representing Mother and Daughter has never proved a difficulty for the somewhat "fluid" perspective of Filianic Trinitarianism.

On this point I must take issue with a Christian doctrine that, while it is perfectly logical within the "economy" of Christianity (a perspective tailored to the limitations of Kali Yuga), which restricts itself to a single world-cycle, and, correspondingly, restricts the condition of the being-in-samsara to a single birth, cannot be taken as the final truth. Christianity states that the Trinity is the Eternal Nature of God.

If by Eternity we mean the entirety of space and time and the whole of manifestation, then this statement is accurate, but if we mean Eternity in its plenary sense, then we must understand that only the One can be Eternal (in a certain sense, only the Nought – though the Nought should not be interpreted privatively or as a negation of Our Mother God).

Such truths, from a Western perspective, would fall within the realm of the "esoteric"; and indeed they are unnecessary for small children such as ourselves who simply throw ourselves upon the mercy of Our Mother.

And I believe that in addressing to Her the salutation "All Godhead is Thee" is proper and natural.

In including this in the Hail Mary, we wished to make a clear statement of the Supreme Godhead of Dea. Actually the phrase "Fount of Grace" does this (just as the Queen is the sole fount of all honours and titles in a nation, so Dea is the Sole Fount of all Grace in the universe), but we wished for an even more explicit and clear statement in view of the ambiguity that can arise on this point in Telluria.

In view of the "fluidity" of Filianic Trinitarianism relative to the Christian formulation, which I have tried to outline in this essay, I believe that the statement "All Godhead is Thee" is thealogically justified, even if it is not the most elegant and felicitous phrasing possible!

On the other hand, I should certainly not press my defence if others feel that this wording conflicts with their devotional Trinitarianism.

My Lady Bishop, I apologise if this seems an unduly lengthy disquisition upon a single line. The truth is that your thoughtful and valuable comments have provided me with both a perspective and an opportunity from which to examine Filianic Trinitarianism to a depth not, I think, currently available in the Elektraspace. This, I believe is the true value of such discussions and I thank you profoundly for your kind attention to our humble efforts.

The Filianic Creed: The perfect statement of feminine Trinitarianism

The Three Fates and Other Reflections of the Feminine Holy Trinity