Philosophy, Beauty, and Truth
The True Philosophy of Beauty 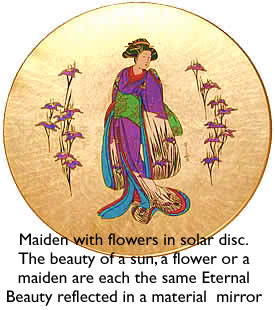 Philosophy, Beauty, and Truth are unrelated according to the modern view of the world.

When the poet Keats wrote:

"Beauty is truth, truth beauty" – That is all
Ye know on earth and all ye need to know.

Most people assume that what is being said is at best charming and sentimental, but ultimately meaningless in terms of real philosophy. In the "real world" of "scientific fact", philosophy, beauty, and truth have no relation to each other.

However, Keats's words are precisely orthodox in terms of Platonic thought, of Vedic or Taoist thought. Indeed of all the traditional thinking of humanity.

When Plato refers to the Absolute as to kalon, the Beautiful, he is making a statement that logically entails that of the poet – that Beauty is Truth and Truth Beauty.

So why is this interrelation of philosophy, beauty, and truth so alien to the modern mind? The answer lies in two radically opposed theories of what beauty is.

According to the materialist doctrine, human beings are merely animals and the world is a mere accident of physics and biology. Nothing exists beyond the material and tangible.

Science is a method based upon the strict consideration only of material things. This is perfectly legitimate, just as it is legitimate for plane geometry to confine itself to two dimensions. If plane geometry were to deny the third dimension it would be stepping outside its defined area and making statements that were inherently absurd.

Similarly, if scientists were to declare that nothing beyond the material can exist, they would be stepping outside their sphere and giving voice to what is – within the very terms of their discipline – absurd and illegitimate.

And of course science does not do this. But many ill-educated people who treat science as a sort of pseudo-religion do think this way. And to a large extent the thinking of the modern world is based on this pseudo-scientific superstition of a purely-material world.

What has this to do with the philosophy of beauty?

Simply this. If there is nothing beyond the material, then beauty can be nothing more than the subjective perception of human individuals.

The very name of the modern so-called "philosophy of beauty" presupposes this. It is called aesthetics – the study of feeling (an an-aesthetic is what we have to stop us feeling something). As Ananda Coomaraswamy has said, aesthetics is the mere study of human irritability.

To the traditional philosophy beauty is not a mere human feeling. Feeling is simply a reaction to beauty. Beauty exists before we feel it and independently of whether we feel it or not.

...let us pause and consider the possibility that beauty is not a relative human perception, but an objective reality. That, indeed, Beauty is a cosmic reality that characterizes all sorts of different things – a flower, a star, a song, an angel – just as surely as hotness characterizes a sun and a fire, or wetness an ocean and a drop of dew.

We should be grateful if you would pause for just a moment in reading this page, and think about this most important concept – that beauty is a cosmic reality, not merely a human perception. That beauty is as objectively real as heat or light or weight. Because if, even for a moment, even partially, you can let this truth take hold of you, you will have broken one of the chains that bind you, and will have seen a glimpse of the cosmos as it really is.

From The Feminine Universe— Chapter IV

Every beautiful thing in creation is beautiful because it shares, to some degree, in the Absolute Beauty which is Dea.

Intelligence, is not mere reason (which simply manipulates and organizes the information of the five senses) but the means by which the contemplative may see things that lie beyond the material.

Traditional thought always speaks of two paths to God, or to the Absolute: jnana marga – the Path of Light, or Intelligence and bhakti marga the Path of Love.

Thus, as we are taught by true philosophy Beauty is Truth and Truth Beauty. And while that may not be all we know, our other knowledge belongs in the sphere of contingent things – things that might or might not be. In the sphere, in fact, that is currently called "science". For the serious scientist knows that science can never speak of what is, only of what is probable.

So, as we know from our philosophy, Beauty and Truth are the only things we can truly Know. The Path of Love and the Path of Light are our only ways to the knowledge of That which Is rather than the shifting flux of material things.

Cosmetic Philosophy: The Metaphysics of Beauty

The Philosophy of Makeup: The relevance of feminine Cosmetic Philosophy to actual cosmetics!